It designates and manages Key Watersheds for fish, wildlife, and drinking water.

It identifies which watersheds are in need of restoration.

It requires monitoring of our watersheds to help ensure consistent, reliable information (though funding for this is rarely sufficient).

It designates and protects a buffer of standing trees along rivers and streams wide enough to keep rivers cool and clean for fish, wildlife, and people’s drinking water. These are called Riparian Reserves.

It limits logging and road construction next to salmon streams and on steep slopes.

And it encourages the removal of old logging roads that send polluted runoff into rivers and streams. 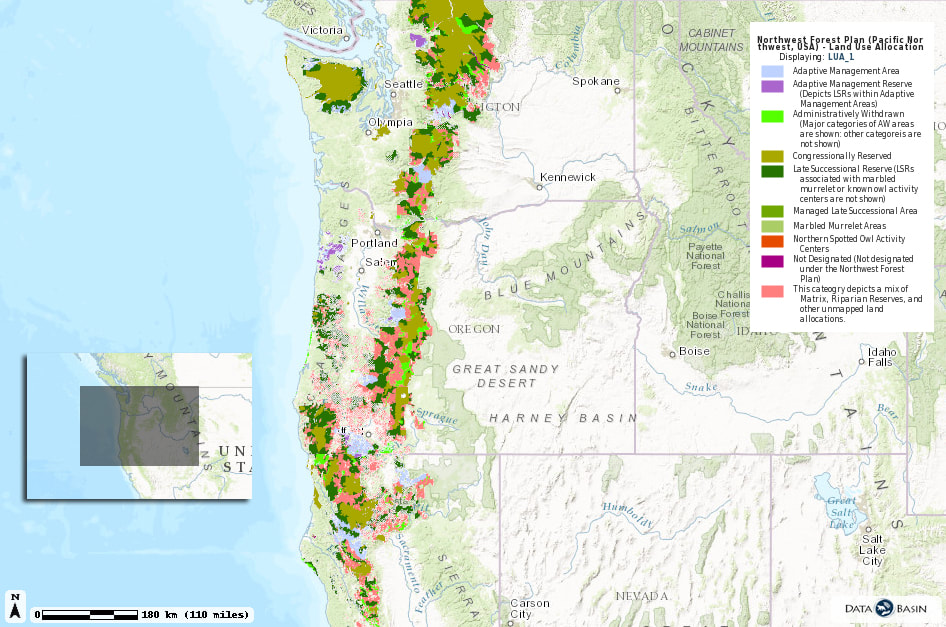 Oregon was once the largest timber producer in the world, and much of this timber came from Oregon’s so-called O&C Lands — 2.5 million acres set aside for the now defunct Oregon and California Railroad. Now they are at risk.
​
O &C Lands are scattered throughout western Oregon. These forests are managed by the Bureau of Land Management and provide beloved hiking trails, drinking water, wildlife habitat, and carbon storage.

1.8 million Oregonians get their drinking water from rivers that flow through our O&C Lands and O&C Lands are in every county but one in western Oregon, including the Portland Metro Area. The majority of western Oregon’s best remaining rivers – Rogue, Umpqua, Illinois, Coquille, Siuslaw, Alsea, Nestucca, Trask, Sandy, Clackamas, Molalla, McKenzie, and others – flow through O&C Lands and they are among the most productive softwood forests and storehouses of carbon in the world.

O&C Lands are hard to protect

Most of the O&C Lands are 640-acre or smaller parcels of federal land interspersed with privately owned lands as you can see on the map above. Their scattered nature makes these lands’ rivers and streams difficult to protect because management varies dramatically throughout. The O&C Act allows for a large percentage of timber harvest revenues to go to counties to support essential services like schools and law enforcement. This creates pressure to log them. There have been numerous efforts to increase logging on O&C Lands, usually near rivers and streams because there are no other places left to cut that aren’t protected by law for endangered species or wilderness.

See our short film from 2013, Forests to Faucets: Clean Water or Clearcuts:

In western Oregon, balanced management is threatened by some timber companies and politicians who advocate for aggressive logging over all other values.
​
Our goals include: